In the Forest with the Endangered Red-Cockaded Woodpecker

An endangered red-cockaded woodpecker flies in to his nesting cavity with a spider in in his beak for the awaiting chicks inside. Red-cockaded woodpeckers are an endemic species of the longleaf pine forest and were placed on the endangered species list due to the destrection of nesting habitat. Longleaf pine forests once covered an area the size of the Amazon across the southeastern United States. But today, less than 10% of this forest remains. @Jared Lloyd. Click image to license.

I’m sitting in the most comfortable “blind” I have ever used. At the moment, the temperature is in the upper 60s, a light wind blows through the forest out of the northeast, and the glow of the sun is still filtering through the forest behind me.

Technically speaking, this isn’t a blind at all. It’s actually a rooftop tent I have set up on my old Land Rover. But a blind is what I am using it as, and so a blind is what it is for the day.

I pretty much make this stuff up as I go.

Me, I spend a fair amount of time camping for my wildlife photography. It’s the nature of the beast when you do this stuff for a living. More often than not, the animals I am photographing are nowhere near a Marriott.

For years I camped on the ground next a campfire, under the stars. Then it was a tent. Then a hammock. But during the pandemic, I purchased a rooftop tent manufactured by a Boulder, Colorado, based company called Roof Nest, and have converted the thing (only for the day) into a rooftop blind for photographing bird nests.

The species in question today is endangered. Red-cockaded woodpeckers are endemic to the longleaf pine forests of the southeastern United States and was one of the first species placed on the endangered species list – landing there some 3 years before the Endangered Species Act of 1973. Barely 7 inches tall, with a wingspan of only 15 inches, this little bird holds the key to the health and wealth of an entire forest in its beak.

Red-cockaded woodpeckers are what we call ecological engineers. This is a term reserved for species with an oversized impact on the ecology around them. And as the phrase implies, the red-cockaded woodpecker, or RCW in bird nerd, quite literally shapes the world in which they live.

An ecological, or more appropriately termed: ecosystem engineer, is a species that changes the habitat and directly impacts the availability of resources for other species in an ecosystem. Beavers are probably the best-known examples of this by the general public. Beavers move in, dam streams, and thus create ponds and wetlands that completely alter the environment and the species in that environment. When you add a beaver dam to a stream, you suddenly create house and home for a grocery list of species that never could have survived there before.

This is what the red-cockaded woodpecker does in the longleaf pine forest.

Longleaf forests are a highly flammable place. Everything about the longleaf habitat, from the pine trees themselves to the wire grass that grows beneath, help to encourage fire. This is nothing like the lodgepole pine forests of the West. Instead, most of the plants in the longleaf pine forest evolved to promote fire as a means of removing competition for finite resources. Which means on average, fires come sweeping through the forest floor ever 2 – 5 years.

This type of fire ecology has a big impact on the availability of nesting and denning habitat for the species that make their living there. Blue birds, for instance, require nesting cavities in trees to survive. So too do screech owls, fox squirrels, southern flying squirrels, and a long list of other species. Normally, all these species would nest or den inside of old dead trees – one of the reason the worst thing you can do for your property is to remove dead trees. But in the longleaf, an ecosystem that is regularly baptized in fire, such dead trees are practically non-existent.

And this is where the little red-cockaded woodpecker comes into play.

Red-cockaded woodpeckers are the only species of bird that can carve out a cavity inside of a living longleaf pine tree. Longleaf pines produce a tremendous amount of sap when damaged – part of their evolution for living with fire. Researchers in the longleaf pine forests routinely find other species encapsulated in tombs of sap after trying to excavate a cavity in one of these trees. But not the red-cockaded woodpecker, who evolved in this unique ecosystem and has not only learned how to manage all the sap when excavating a tree cavity but has also discovered how to create sap wells all around their cavity to both deter, and in the case of snakes, kill nest raiding predators.

So, what you end up with is a situation in which every single species of bird, mammal, amphibian, reptile, and insect in the ecosystem that needs a safe place to nest or den or take cover from fires, is 100% dependent upon the red-cockaded woodpecker for those cavities and thus their ability to even live in the longleaf pine forest.

All said and done, over 30 different species depend upon the red-cockaded woodpeckers’ presence in the forest for their own survival.

Remove the RCW, and all those species cease to exist there as well. 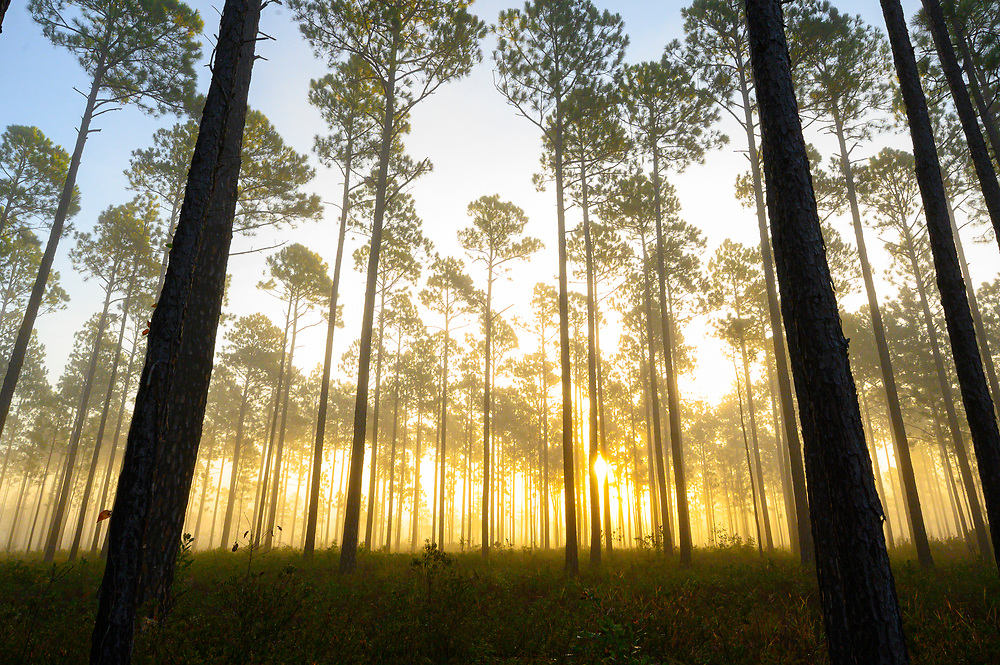